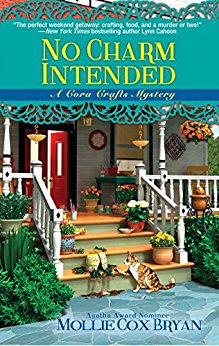 I would like to thank Kensington Books for inviting me to review this book for them; I obtained it as a free electronic ARC via Netgalley in exchange for an open and honest review.

Okay, from my score you might guess I didn’t exactly enjoy this book and I really really want to apologise to Ms Cox Bryan here and now as I don’t want her to think my review is all mean and nasty. As what I’m about to say is meant as constructive criticism and not some bitchy attack or spiteful meanness. If you don’t agree with what I’m about to say, please remember the magical mantra: “Pfffft, what would SHE know!”

So… I am going to state again that the copy of the book I read was an ARC and that I was invited by Kensington to read it… I did not go out of my way to seek it down and pick on it. In fact, when I initially saw it in Netgalley I skipped past as I wasn’t too sure how I’d go as I’d read the first book, felt it had some jitters and issues I was willing to put down to first book in the series stage fright and try again. I mean, I simply love the setting, the house, the concept of craft retreats. If this was real and in my area I would be there every other day… if it wasn’t for all the murders. 😉

And I am also going to blame the fact it was an ARC on a lot of the flaws I found… ARCs are not the finished product; they are going to contain clangers. And I will also state here and now that it is my firm belief that these clangers were all sorted out before the finished book was published… Well, it is my firm hope they were.

I am not going to painstakingly list and nit-pick each issue I found. I mean, there was the usual wrong word used (or left out completely) and, hey, I am a typo Queen so never judge people on that.

But when people’s names are spelt a few different ways depending on where in the book they are mentioned… I do get a bit huffy. Then when people change who they are (we swapped from Jane to Cora at one point then back again)… this is poor editing. But – it was an ARC!

I guess what really got me was the way people were one place then suddenly another with no explanation. Holed up way out in the boonies and then in a bed and breakfast. At school but asleep at home? The days and time of days kept swapping about too and, yeah, I got a little frowny at that level of lack of editing/proofing, even for an ARC.

Also, the black and white world the characters seemed to live in. It was either this or that. Nothing else. People were either this way or that way – no grey in between. All depressed people just can’t be trusted, especially around children as they are a risk. Quick, tell my kids! I am a risk despite my Zoloft! And the main characters also came across as quite shallow would go from totally emotionless to OTT emotions and reactions to things within a paragraph and then back again. Anxiety and abuse issues are okay and natural as they have them, but other forms of mental illness or physical issues are alien and negative?

I honestly almost put this book into my DNF (Did Not Finish) pile four or five times as it was just a big jumble of a mess. One moment it would be going well and then all the jumping about, black and white, clanger filled writing would be back. As with the first book, it was almost as if two people were writing this book and only one of them was actually a decent writer.

The story jumped about and, although I guessed the ‘bad guy’ pretty much right away, the end of the book held no true explanation or reasoning behind it. More that the whole crime side of the book sounded like a good idea at the time, but that it wasn’t executed that well and seemed to clash with the cosy craft side. It was like two ideas smooshed together and they didn’t mix as well as possible or hoped.

And this is where Ms Cox Bryan, all her friends and fans will now be hitting the dislike and cussing me. Just don’t get the effigies alight if you are in a total fire ban area okay? 😉 I am so sorry to be so critical of ‘No Charm Intended’ and I feel it got to me so much as the setting, characters, story concept, etc is perfect for the cosy crime/ mystery genre. I guess I am just grumpy as I see so much potential and talent ruined by some poor editing, quite frankly, sloppy writing. Please forgive me.

Would I recommend this book to others?

I am really torn here as I just don’t know. The first book in this series had a few issues, but rather than those issues being resolved and improved upon in the second book, they’ve gotten worse. So as much as I see a LOT of positives and potential in not just ‘No Charm Intended’ but the whole ‘A Cora Crafts Mystery’ series… I don’t think I could personally face another book in this series and so just don’t know if I could safely recommend them to others.

Would I buy this book for myself?

Pretty sure we all know the answer to that question. If it was of the same quality as the ARC I received, then no I wouldn’t. I just pray the final edit was smoother and all the jumbled, sketchy nature of the story was smoothed out.

In summary: A series that has potential but not one I can see myself returning to to find out.