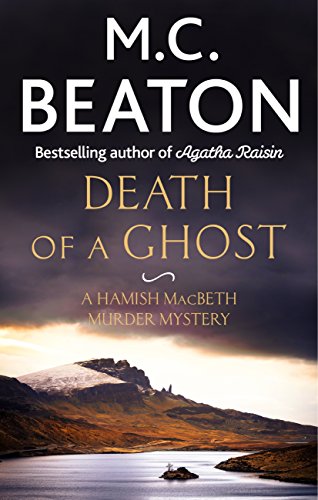 I would like to thank Grand Central Publishing for providing me with a free electronic ARC of this book, via Netgalley, in exchange for an open and honest review.

For the record I have been a huge fan of Marion Chesney (AKA M.C. Beaton) for at least a decade now… and not just of her Hamish Macbeth series… which is far, far better than the silly TV series.

And so I was thrilled to be given an opportunity to read the latest Hamish tale… even though I think I am now about 8 books behind in the series… Boy I’ve been slack! There, that is me being open and honest so please realise I am not a terrible person when it comes to the following constructive criticism… Uh oh.

So! As I’ve said, I am not as up to date with the series as I would have loved and so am not going to make comment on it referring to stuff I didn’t know as the only person I have to blame there is myself. But I have to say there was just something lacking in ‘Death of a Ghost’ that made it not seem that polished and finished as the other books I’ve read in the series. Though, this is the first time I’ve read an ARC of the series and so the less than polished to perfection feel could simply be due to that.

All the same I just found the story a little sketchy at times. You would have the major scene… followed by a few one liners that filled in the next few hours (sometimes days) until the next big major scene. It almost came across as notes and I expected to see the editors scribe on in the margin saying “to beef out later” or something. I really got despondent in the quality of the writing after a while as it really came across as if half the story (the boring filler bits) was just missing and the sketchy one liners therefore diminished the quality of the overall work.

I mean, all the usual “Hamishness” was there and it all seemed to fit the usual pattern of a Hamish Macbeth tale… but it simply felt half-finished to me. Perhaps I am just being a perfectionist and asking too much? I don’t know. But I will have to admit the sketchy quality of the writing has put me off being as eager to read other new works by Ms Beaton just in case this is common to her writing style these days.

Would I recommend this book to other?

Saying all of that, I would. But, of course, being the 35th book I would recommend those who have not read the series before start back at book one. And for those who have read the series… I wouldn’t mention my sketchiness concerns until after they’d read and to see if they saw it too or if I really was just being a bit of a book diva again.

Would I buy this book for myself?

In summary: Even after all this time, Hamish can still solve some of the cleverest crimes by jumping to conclusions and guessing. 😉