Okay, as I’m in Adelaide I simply have to jon in the fun at the Fringe Festival. Sadly, thanks to my HFASD son having issues with me being out of the house after dark, I can’t actually attend the Fringe, but I can at least still share the love.

Here is an interview with Award winning – a bronze swimming award and then some – UK comedian Tony Cowards. Get along to check out his show, I’ve watched a bit of his stuff online – I laughed, so must be good. 😉

So Tony is here in Adelaide right now! And was sweet enough to answer some questions I set him. Though I am still waiting to see if he takes me up on one of the Adelaide challenges I set him. I mean, who hasn’t gven our Mall’s balls a rub or ridden a bronze pig, right?

To find out more about his show, check out the Fringe page linked to the below image. 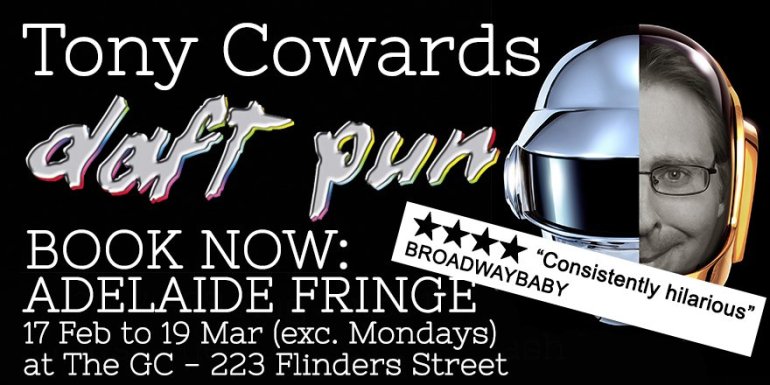 And now for the interview…

What is the name of your act?

Briefly (you must use more than 10 words) explain what your act is all about.

How did you come up with the idea?

I thought of the title “Daft Pun” and the poster and then wrote the show. I’ve been writing silly jokes for most of my life, even before I actually became a comedian, so there was plenty of material to work with.

Where are you from?

I was born in Ipswich in the UK and now live in a picturesque village called “Swindon” (for anyone who’s not been there, I wouldn’t bother).

Why come to Adelaide?

Why not? It’s a lovely city and somewhere I’d not really seen much of before. I was here briefly in 2002 but was traveling at the time and didn’t get a chance to experience the city.

It has a reputation as laidback place and a wonderful place to do comedy.

Where else have you performed?

I’ve performed at various festivals around the UK including 4 shows at the Edinburgh Fringe.

Want to brag about any awards or similar?

I got my bronze swimming award at school.

Comedy wise I’ve had a few awards (a Silver Sony Award for a Radio show being a highlight) but they pail into insignificance compared to the swimming one.

What, if anything, did you know about Adelaide before deciding to perform here?

I knew that it’s a lovely city and regularly features in the “Most Liveable Cities” lists that seem to crop up in the media from time to time (usually during slow news weeks).

What do you hope to get out of your time here?

Some sun! Having flown over from a very grey, cold and damp London, it’s just wonderful to see that weird yellow thing in the sky.

Other than good weather, it’d be nice to get some lovely audiences and to have a lot of fun.

Please come to my show. Please.

8.30pm every night in The Cellar at The German Club, 223 Flinder Street