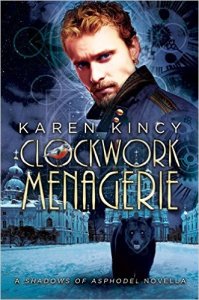 I would like to thank Curiosity Quills Press for an ARC of this Novella in exchange for an open and honest review.

This was a good story; my only regret about it is that I wasn’t paying attention when I requested it to see it was a novella and book “2.5” in a series I’d not yet read. Totally my own fault as Curiosity Quills did say it was what it was, but I’m a bit of a diva about coming into a series midway and so couldn’t give this story a higher grade as I wasn’t caught up on it all.

Saying that, I did enjoy reading it as a stand-alone type story, but would have liked more history on the world in which it was set, which I’m pretty sure the first to books would have given me.

My only other minor gripe (it seriously is minor) is that it was more of a romance story than the urban fantasy/ steampunk I had been hoping for. I have no problem that it is “male on male” romance as that’s perfectly natural, and I don’t mind romance stories… but I am getting frustrated at the amount of paranormal, supernatural, steampunk and urban fantasy stories that seem to need to rely on sex and romance to be an interesting read. The romance in this book was good. The minor sex scenes were done well and didn’t hog the lime light. I just feel it would be nice to see more urban fantasy (and similar genres) not needing the romance sub-genre to get by. Okay, getting down off my little soapbox on that one. 😉

Other than that, I loved it. I want to know more about the world in which it is set, its technology, history, etc. So that is a well written story when the world captures your entire imagination and draws you in.

Would I recommend this book to others? I would mention it in passing to those interested in urban fantasy and steampunk worlds, but would warn people this isn’t the first in the series and would suggest they check out the first two books before reading this one.

Would I buy this book for myself? Possibly. The excellent writing style and world created intrigued me enough to go check out the first two books, but as they too seem to heavily rely on romance to be a story… I’m really undecided as to whether I’d buy them to read them. I’m more likely to be a cheapskate and look out for them in my library catalogue first to see if I could cope with the romance and see if it was the lead genre or the sub-genre of the stories.

In summary: A good story concept, a good little novella adventure. But not the first in the series and not a pure urban fantasy/ steampunk genre tale. Contains romance and should include this in its genre statement.