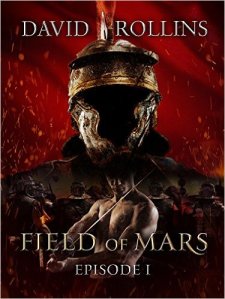 I would like to thank Momentum Books for providing me with an ARC of this book via Netgalley for an open and honest review.

Okay, I’m going to start with the positives as I feel this book does deserve some, despite my rating.

This is a very detailed story. It does capture the imagination and paint a clear and precise picture for the reader. It is well written and I do give big thumbs up to Mr Rollins for that.

Sadly, I didn’t like the story that much. The introduction done in first person nearly put me off even finishing the book. But I read other people’s reviews about how that was just the first part of the book so I gave it more time and found it readable once it switched to third person.

Being a fan of historical fiction set in Rome (Roma actually), I have some idea of life there and the usual goings on. And so to find a mildly graphical sex scene in just the introductory pages… as this is meant to be an historical fiction and not an historical romance, I was disappointed in the need to try and draw the reader in with sex. Oh, don’t call me a prude! There is a genre and place for it and it really wasn’t needed here and really just cheapened the book for me. It felt like it was trying to get the reader interested in the story by suggesting there was more ‘naughty bits’ to come. A good writer – and I have said Mr Rollins comes across as a good writer – shouldn’t have to use such tactics to draw the reader in. It was one of the main things that put me off wanting to read more.

Saying that, I also couldn’t see – despite the information given as to why – how it could be the historian telling the whole story. How did he know about Rufinius? He was up with Crassus the whole time. And where was he at the end of the book? How can he still be telling the tale when he’s not even mentioned after the final fight?

I know this book is the first in a series and the answers to these questions may become obvious in the later stories, but for now it’s not gelling with me at all. I found it just added to the first part of the book being a waste of time and just used to draw in the type of reader hoping to cop an eyeful of sex later on.

As I have said, it is a well written book; I did like parts of it, mostly when dealing with the Legionary, but not enough to encourage me to seek more information on Rufinius in the next book in the series.

Would I recommend this book to others? Maybe. I really don’t know. Being a fan of historical fiction set in ancient Rome, I may mention it in passing to anyone after something of that era to read… but then again I might not. Though I would mention David Rollins as a good author and suggest people seeking an interesting Australian author look him up.

Would I buy this book for myself? Sadly no. I might read the next in the series if I was to come across it in the library, but I’d not go out of my way to find it. I might just stick to the likes of Steven Saylor when I next need my ancient Roma historical fiction fix.

So in summary, it’s a well written book and I’m pretty sure there are people out there who will really enjoy it, I just wasn’t one of them. The fault is in the reader and book not gelling, not in the book itself.